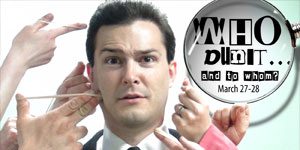 The “Whodunit” to end all “Whodunits!” The Academy Players present this hilarious spoof of the classic “gumshoe story,” with more twists than a loop of licorice. Henpecked paint salesman Harold Finnegan is trying to pound out his umpteenth third-rate detective story. As he writes, we see the actions played out on stage, and as he corrects his writing, actors are forced to revise their actions! Our tale really goes wild — from policeman wielding rubberbands (Harold doesn’t like violence in his plays) to strange characters continually cropping up… characters with the power to stop the play and freeze the other characters. Who really is writing this play anyway? Is it Harold? Or has he lost control of his own thoughts?

Buy Early for the Best Seats